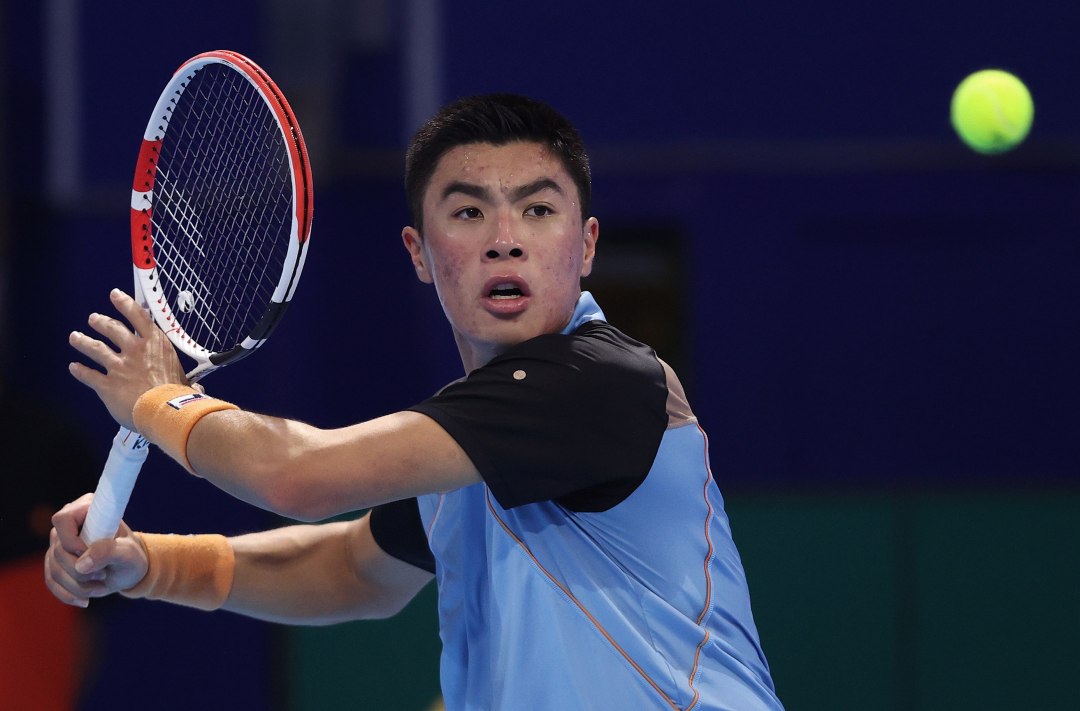 The San Diego main draw kicked off on Monday with four matches, including two that went into three sets.

And don’t forget about this play!

Now we switch gears to Tuesday, as there are four more matches on slate starting at 11:30 a.m. PT. Two of the matchups will be all-American battles.

Let’s dive in and preview all four clashes.

Eubanks and Krueger go head-to-head in a battle between American qualifiers.

I’ll start with the 27-year-old Eubanks, who at 6-foot-7, relies heavily on his powerful serve and rocket forehand. He struggles a bit with his one-handed backhand, but overall, Eubanks has put together a solid season, winning four main-draw ATP Tour matches, including one at the US Open over Pedro Martinez.

Meanwhile, Krueger also relies heavily on his serve, and he too has won multiple main-draw ATP Tour matches this season (three overall).

The 28-year-old has struggled of late, though, needing two three-setters to even reach the San Diego main draw. Before that, Krueger lost five of his last six matches, including one to 356th-ranked Keegan Smith at a Cary, NC Challenger Tour event last week.

These two have four combined meetings, with two of the four going the distance and four tiebreakers being played in 10 total sets. Eubanks has won three of the four matches — including one in San Diego qualifying last year — but this will be the first time they meet in an ATP main draw duel.

I think Eubanks pulls out this victory. I like his form much better, and he has some confidence after winning a straight-setter at the US Open.

If you’re looking for a bet, I like the Over 23 games. Why? Well, just look at the past history between these two and the fact that they both rely heavily on their serves. Expect at least one tiebreaker and maybe a three-set match.

Beyond a nice win in Atlanta against Sebastian Korda and a tight match vs. Frances Tiafoe in that same tournament, it’s been a quiet summer for Daniels.

And on these medium-fast courts in San Diego, he could struggle.

That’s especially the case when playing Nava, who won his first ATP main-draw match this summer at the US Open against John Millman. He then took a set off Andy Murray in Round 2 of New York’s Grand Slam.

Nava also won a Challenger Tour title in Kazakhstan earlier this year, and most importantly, he just recently defeated Daniels in three sets in Winston-Salem qualifying.

This is a tough match to predict because of the tight recent scoreline between the two. I personally think Nava will win this match — he’s from southern California and is playing the best tennis of his young career — and will cover the +2 from a betting perspective.

But honestly, I wouldn’t be surprised if this is a close match that comes down to three sets. Remember, Daniels is a veteran at 29 years old playing a 20-year-old in Nava who he beat 7-5, 7-5 in qualifying of Indian Wells earlier this year before their latest three-set meeting that went the youngster’s way.

This is a battle between two veterans looking to shift the late stages of their careers.

For the American, Kudla, he is 5-15 on the ATP Tour this year, including just a single win during the US Open Series on hard courts this summer (def. Michael Mmoh in three sets in D.C.).

That could be a negative factor for the American, but he has an advantage against the 38-year-old Verdasco, who has just four wins in ATP main draws this season and has had very little success himself this summer.

In fact, the Spaniard is coming off of an ugly loss to 971st-ranked Koray Kirci in a Turkish Challenger Tour event. That comes on the heels of a loss in the third round of qualifying at the US Open to Pavel Kotov.

Verdasco hasn’t won an ATP main draw match since April, and I don’t expect it to get any better as he adjusts to an event that he has never played at in his career.

This is the biggest mismatch of the day, but also a hometown battle between two players who are from the nearby San Diego area.

Nakashima is my pick to win this event, as he has put together a breakout season in 2022. The American is 21-19 on the season and has had solid success in three of the four Grand Slams.

Naka reached Round 3 of the US Open, looking superb in a straight-set, second-round win over Grigor Dimitrov before taking a set off of Jannik Sinner in his next match. He also reached the Round of 16 at Wimbledon (before losing to Nick Kyrgios) and the third round of Roland Garros (lost to Alexander Zverev).

While he’s ranked just 69th in the world, Naka has an elite baseline game, is serving much better and is just 21 years of age.

Meanwhile, Svajda is just 19 years old, but doesn’t nearly have the experience and tour-level success that his opponent has. While he is certainly familiar with Naka’s game, Zach has won just one tour-level match in his career and is playing his first ATP main-draw match of this season.

Svajda is most comfortable rallying from the baseline, where his solid defense comes into play. That favors Naka because Brandon makes very few errors and can dictate any point from both wings.

Svajda doesn’t have much power — both on his groundstrokes and serve — so that shouldn’t be a factor in this match.

And if Naka serves well — which I think he will since he has been all summer — this match could be over quickly.

View all posts by CC